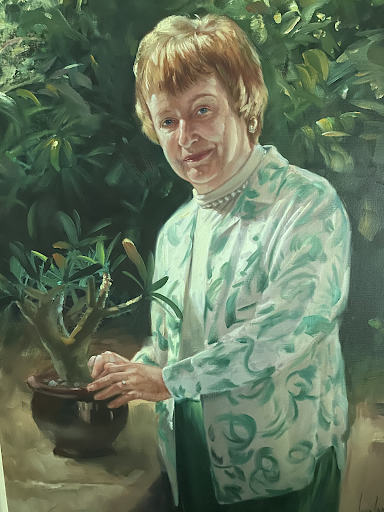 Sallye Garrigan was born in Baltimore, Maryland in 1926. She graduated from the University of Maryland with a degree in Economics and was awarded a Kappa Delta sorority scholarship to do graduate work at the University of Minnesota in Minneapolis where she received a Masters in Elementary Education. It was there that she met a young medical student, James Jude, at a Catholic Club gathering. They married in 1952.

In the mid-1950s, the Judes returned to Baltimore to live, work and to raise their family. It was while Dr. Jude was doing his residency at Johns Hopkins University that he was part of a team that pioneered the research that led to the development of CPR. Dr. Jude’s work with CPR received national recognition and brought the Judes and their family to Miami in 1964 where Dr. Jude became chief of thoracic and cardiovascular surgery at the University of Miami School of Medicine and at Jackson Memorial Hospital.

Upon arriving in Miami, Sallye – while raising her family of seven children (5 boys and 2 girls) - became an active and integral part of the community. She was involved with the medical wives’ group, her church, and in her children’s schools. She is credited with being part of the small group that founded the Dade Reading Foundation – one of the earliest programs in M/D County for learning disabled children.

But it was in the environmental and historic preservation realms that Sallye’s star would really shine!

Sallye’s love for her community and deep affection for her family and friends is readily apparent to all. Since arriving in Miami she has been a steward of the environment, historic preservation and her church contributing with both her time and her energy. She has a heart of gold and is kind and warm and always has the time to stop and give support and encouragement to those coming up behind her(or attempting to follow in her large footsteps). She is truly an inspiration!

With your personal donation you have the ability to honor or memorialize a friend.

Thank you for your support!